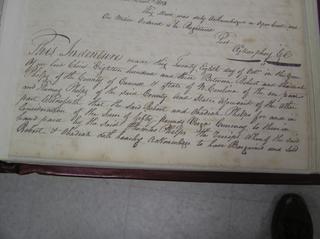 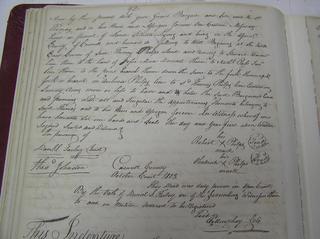 This Indenture made this Twenty Eighth day of Oct. in the year of our Lord

Christ Eighteen hundred and three, Between Robert and Obadiah Phelps of the

the said County & State Aforesaid of the other part. Witnesseth that the said

Virginia Currency to them in hand paid by the said Thomas Phelps, the Receipt

and to his Heirs and Assigns forever, one certain _______ Tract or parcel of

Land. Situate Lying and being in the Aforesaid County of Caswell as bounded as

To Wit: Beginning at the Southeast Corner of said Thomas Phelps Land and running

to Stewart Warren's line thence to the land of Jesse Moore- Deceased, thence to

Nathaniel Pass Sr.'s line, thence to the pond branch, thence down the same to

the fork, thence up fork in branch on Ambrose Phelps line to said Thomas Phelps

the said Thomas and to his Heirs and Assigns forever.

This deed was duly proven in Open Court By the Oath of Daniel L. Farley one of

the Subscribing Witnesses thereto and on Motion Ordered to be Registered.