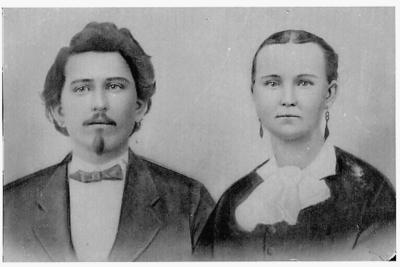 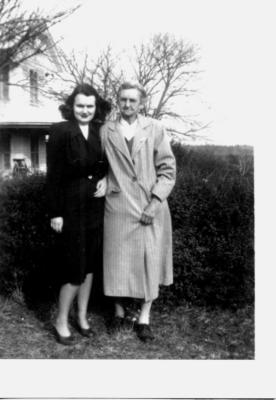 Ellis Fitzgerald(1849-1909)& his wife Ruth Albarty(1847-1926) --Parents of Molly Fitzgerald Phelps--wife of Wyatt Edward Phelps---Ellis's Father William F. Fitzgerald(1827-1862)was born in Pittsylvania County,Virginia,and resided as a farmer in Guilford County,N.C.,where he enlisted in the Confederacy for the Civil War at age 34 August 27th,1861. He was killed in the battle at Malvern Hill,Virginia July 1st,1862. Ellis Fitzgerald was the eldest son of William F. Fitzgerald and Sara(Sally)A.Elizabeth Woods. Ellis had three younger brothers-James,William & Thomas Yancey Fitzgerald(1857-1894)who married Corinna Frances Phelps(1861-1904)were ancestors of Bob Timberlake-the Artist.The picture of Ellis & Ruth above is thought to be their wedding picture,and was graciously supplied by my Cousin Kathy Parker Oakley-Daughter of Kathleen Phelps-My Great-Aunt-sister of My Grandfather Elmo Phelps.


When I starting helping my son, Latham Mark Phelps in March 2001 to seek and
input to my Family Tree Maker program the descendants of my grandfather, Wyatt
Edward Phelps and his two wives Robenia (Beany) Blackwell and my grandmother,
Mary (Mollie) Fitzgerald, I visited a number of cousins, sent letters to many,
and e-mailed many. Heretofore, family link to Timberlake's was based upon oral
history. However during a visit to Roxboro, N C at Inez Rogers Phelps's home.
She told me many years ago a Casper H. Timberlake, Sr. visited her late
husband, Malcom Phelps during the period Casper was researching his association
with Phelps family. At this time, I contacted Bob Timberlake, the Artist in
Lexington, N C July 11, 2001 in an attempt to obtain a copy of Casper's research
but e-mail response from 'myyounts@bobtimberlake.com' no copy here. Meanwhile,
Mark loaned me his research material and a copy of Casper's research, post
marked from Lexington, N C on January 09, 1984 was found. The following is a
transcription of Casper's research. Dessie Arline Phelps was the Mother of Capser H. Timberlake and his Great Grandfather was William F. Fitzgerald.


William F. Fitzgerald was born in Pittsylvania County, Virginia about 1827,
(Since his age was listed in the June 02, 1860 census of Guilford County, N C on
Page 4, Visitation 27, North Division). His parents are unknown at this time,
(We think his father was John Fitzgerald, Jr.).


He was married to Sarah (Sally) A. Elizabeth Woods in Yanceyville, N C at the
Court House on March 14, 1846. Samuel E. Moore was bondsman.


An addition: Corrrinna Frances Phelps was the daughter from the union of John
Lee Phelps, son of Thomas H. Phelps and Sarah Ann Riggs on November 15, 1859 in
Person County, N C. He died in 1838 and buried at Jones/ Riggs cemetery, about
one- half mile from the Phelps Family cemetery.


There is a tradition in the family that Edmund Fitzgerald, Sr. was born upon the
high seas, parents being emigrants to America. He first appears in Pittsylvania
County Virginia records in 1778, when he purchased 100 acres on the North side
of the Bannister River. In 1814 he and his wife Mellicent (Pane) made a deed of
gift of 300 acres on Bannister River, which he had purchased from Haynes Morgan,
to their son Edmund Fitzgerald, Jr. Here Edmund Fitzgerald, Jr. built his home,
which is standing today in fine state of preservation, and owned by his grandson
Samuel Stone. The will of Edmund Fitzgerald, Sr. was proven January 1884, in
which he made heirs: sons Reuben, Samuel, Edmund JR., James, and William
Fitzgerald; and daughters Nancy wife of Hardin Wilson, and Elizabeth wife of
James H. Stone. The latter settled the old Pine Old Place, "Oak Grove", with its
Boxwood Gardens. (From Page # 172 History of Pittsylvania County, Virginia.)


The daughters of the American Revolution Lineage Book - Page # 215 # 121669,
Mrs. Susan Womack Lewis born in Danville, Virginia, descendant of Lieut. Edmund
Fitzgerald. Edmund Fitzgerald served as Ensign and entered and Lieutenant, 1778-
1781, in the Pittsylvania County Militia. He was born at sea and died in
Pittsylvania County, Virginia.


Edmund Fitzgerald deeds to his son William Fitzgerald for love and natural
affection which he bares to his son and the sum of $1.00 a acre a 500 acre tract
on the north side of Bannister River. Deed was dated 17th. Day of May 1819.
(See Deed Book # 22 - Page # 227 - Pittsylvania County, Virgina.)


A deed dated September 25, 1866, Mary Letitia Clark deeds to William Fitzgerald
for the sum of $2000.00 all her Right, Title and Interest Unto one third part of
the Bannister Mills and Fixtures and Machinery, Stock of hogs, a Negro man Sam,
and all the profits arising from said one-third part of the foregoing of which
the said Mill is situated as well as her interest in the 100 acres land more or
less adjoining the said Mill situated between the Road running from said Mill to
Clark's Bridge. (See Deed Book #56 - Page # 396, Pittsylvania County, Virginia.)


William Fitzgerald died 0n 1866, his will is dated 12th Day June 1866. The will
was probated in Pittsylvania County, Virginia; the will names his daughters,
Mildred, Jane, and Martha Fitzgerald daughters of Mary Montley (wife of John
Montley who were married October 24, 1842.) and Rebecca White. His sons Thomas,
a Edmund Fitzgerald, and William Fitzgerald, deceased who married Virginia Smith
July 10, 1855, daughter of Sexton W. Smith & Mary Smith.


I William Fitzgerald of the County of Pittsylvania and State of Virginia do make
this my last will and testament, hereby revoking all former wills.


First - I direct my just debts be paid.

Second - I give my three daughters Mildred, Jane, and Martha Fitzgerald my track
of land on which I reside, also fifty acres of land to be cut off the my lower
end the Mill Tract, beginning a line between a Gate and Branch in the left hand
side of the road leading from my Mill to Spring Gardens the said one hundred and
fifty acres to be cut off towards the Mountain - Also give my three daughters
all of my house and Kitchen property - Stock of all kinds, Crops of every
description, all my plantation Tools, my Riding Carriage and Two shares I own in
Richmond & Danville Rail Road, my daughters, equally in the aforementioned said
property, and any surplus money I may have on hand, I give my three above
mentioned daughters.

Third - I give the balance of my Mountain Land to my daughter Rebecca White.

Fourth - I give my son Thomas Fitzgerald and my daughter Rebecca White five
hundred and fifty acres land adjoining lands of Thomas Cook & others not far
from Stanton River on the waters of Reed Creek to be equally divided between
them.

Fifth - My Mill, and land attached except the fifty acres given to my daughters
Mildred, Jane, and Martha, I give my son Thomas Fitzgerald pay some personal
attention to said Mill without charge, he having one half and my three daughters
named above other half.

Sixth - I give my son Thomas Fitzgerald one share in the Richmond and Danville
Rail Road.
Seventh - It's my will that my three daughters Mildred, Jane, and Martha give
something to my granddaughter Martha W. Fitzgerald, daughter of my son William
Fitzgerald, deceased provided my three daughters above named are willing to do
so.
Eighth - I give nothing to my son Edmund Fitzgerald he having heretofore had a
portion of my estate.

Ninth - Having given to my daughter Nancy Montley property heretofore so I give
her nothing in this will.


I hereby constitute and appoint my son Thomas Fitzgerald my Executor.
Witness my hand this 12th Day of June 1866.

Born in Pitteylvania County, Virginia, and resided as a farmer in Guilford
County where he enlisted at age 34, August 27, 1861 for the war. Killed at
Malvern Hill, Virginia, July 1, 1862.

Born in Caswell County, N C and resided as a farmer in Guilford County when he
enlisted at age 34, August 27, 1861 for the war. Killed in February of at
Malvern Hill, Virginia, at Aquia Creek of "bran fever".