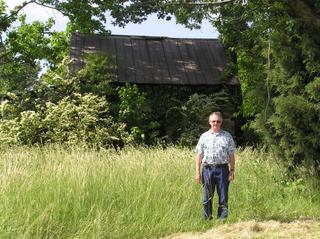 The cabin where my Father was born in 1928 and some oral history from Dad as to the old homeplace which stood across the road from the cabin.

My Dad, Latham Phelps in the picture in front of the cabin in 2004.

I was born in Person County. N C in the Bushy Fork Community at the homeplace, no longer standing but the Phelps Family cemetery, enclosed several years ago by descendants, sitting in cow pasture and with about 13 graves. My GG Grandfather, Thomas Haywood Phelps is buried there, but no marker and my Grandfather, Wyatt Edward Phelps and his two wives Robennia (Beanie)Blackwell and my grandmother, Susan (Mollie) Fitzgerald.

The homeplace was "T" shaped with top of the "T" being the front section, surrounded large orchard, "T" section was two stories with four rooms, pump type organ, crank phone on wall but not working, siding was white pine and painted white and roof was tin, porch supported by large columns wrapped around right side into the "I" part to the other-side where it continued, but screened in back to the smoke house and with a nearby outdoor well. The interior of the "I"section consisted of large kitchen, dining room with a hand pumped water pump at the sink, and with a large cooking and heating of water wood stove. The other side of this section was screened in joining a storage room. The back section was over a full basement. In the summer time , a large block of ice was kept in the ice box on the side porch. The "jonnie" was outside and always tuned to the existing climate. There was also sitting on the property a very old pine ( logs appeared to be two foot tall, scaled, and pegged), kitchen in back and an enclosed area in the rafters.

Here is some oral history: several of my living cousins recall from their young days being told that our family (two brothers, one of which had redhair, came from PA; my younger brother remembers being told they came from VA; and Doug Phelps remembers it was three brothers with one settling in the eastern part of NC.

My Dad, Lewis Elmo Phelps attended church all his life in a community church called ''Wheelers Primitive Church', believed it was established in 1760. While attend church, estimated to be when I was around 16, and by a member with a last name of Snipes saying his wife was a Phelps family member and he had in his possession old deed showing that the Phelps farm at one time had more 5 K acres. None of my living cousins were unaware of this information!