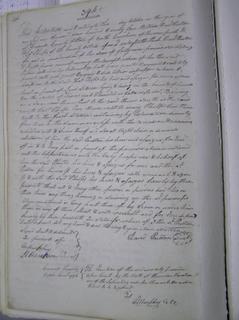 & State of North Carolina of the one part & Thos. Phelps of the County and State

aforesaid, Winesseth that David Preston for and in consideration of forty nine

Creek and bounded as follows, to wit,

or less, with the reversion & reversions remainders unto & services thereof and

also the right, claim or demand whatsoever of him the said Preston his heirs and

the said Phelps his heirs and assigns forever and the said Preston for himself,

his heirs & assigns, doth covenant & agree to & with the said Phelps his heirs &

abovementioned or Any part thereof by from or under him them or any of them,

Shall and will warrant and forever defend firmly by these presents.

In witness whereof, I the said Preston doth hereunto set my hand & seal the day

and year above written.

Novell shareholder urges company spinoffs, cuts
This article originally stated Blum Capital thought it could generate $500 billion in revenue by selling off several groups.
Hey, you have a great blog here! I'm definitely going to bookmark you! I have a low credit score home loans site/blog. It pretty much covers low credit score home loans related stuff. Come and check it out if you get time :-)

I should be interested if you have any family information about David that might be included on the House Preston website for family records (www.mpreston.demon.co.uk) which I have been constructing. However, I do appreciate that you may not have been able to find anything more than in your blog page.

While still in the early stages, you may find it of interest to check the website and - perhaps - you could be able to add data to the records.